Fear, Faith, and Patience: My Fight For Justice In a Unjust System by Felecia S. Killings


Fear, Faith, and Patience:
My Fight For Justice In a Unjust System
PowerFaithLove Publishing, CA (February 17, 2012)

***Special thanks to Paulette Harper Johnson for sending me a review copy.*** 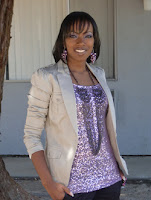 Felecia S. Killings is a quintessential educator and promoter of change, transformation, and innovation within the educational field. Her years of dedicated service to education, and ascribing to the motto that “Learning is a Lifestyle,” has resulted in extensive years of training and preparation in the educational spectrum. She received her Bachelor’s Degree from the University of California, Davis in 2005 with double majors in English and African and African American Studies. She also obtained her Master’s Degree from UC Davis’s School of Education in 2007. She has received preliminary Doctoral of Education course work at Argosy University from 2008-2010; and will complete her Doctorate of Philosophy in Education with emphasis in Organizational Leadership at Northcentral University in Arizona. Felecia has provided her community with five years of service as a public-school English instructor. She has also created educational programs that help minority youth reach their full potential through excellence in education, job training, and college and career preparations. Felecia is also an author and publisher, and founder and CEO of Power, Faith, and Love Ministries, which oversees seven organizations.

We often wonder what it is like to be a teacher in today’s time. With so much happening in the public schools, it seems any wonder how it is able to function given all the atrocities that go on in the system. But this is the story about a young, beautiful teacher named Felecia Killings. As a child, she dreamt of the opportunity to be what many call one of the most admirable professions in society: an educator. And when her father witnessed this aspiration in her, he did everything in his power to protect it and to ensure that she fulfilled her mission. Yet, like so many countless individuals who enter the public school system, Ms. Killings was met with tragedies and struggles. But through it all, she allowed her faith to keep her strong, even in the midst of hell.

This book is one to be commended, for it takes what we think we know about the public school system and brings to light another side that is never talked about. Through this text, you will learn about the power of unconditional love and personal sacrifice. For every teacher who chooses to stand up for what’s right, even when everyone is against you, this book will minister to you in ways that even you could not imagine. You WILL be inspired.


“You will be a Queen Esther” 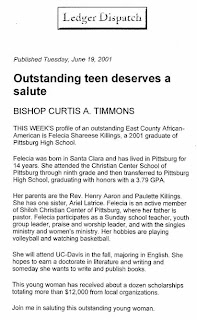 I could not wait to leave high school. Although it was an interesting experience, it was not what I had expected it to be. Looking back on it now, I think the best option would have been for me to have remained in the private school setting; but I am grateful that the Lord still used that experience to work in my favor. After all, it was because I went to a public school that I developed a heart for students who were forced to attend them. I believed that if a public school, with all its failures and what not, could have a good teacher in its organization, then there was hope for those students who had no choice in being there. This passion for the youth grew only stronger as I entered my undergraduate study at UC Davis.
In September 2001, I made my way to the first of a few college campuses that I would attend. For me, college was everything that high school was not. It was new and challenging. I was surrounded with people who had worked hard to get there. Exceptional learning was the norm; and for the first time, I felt like I fit in with others. I was not surrounded with stupid females. I did not have to worry about high school boys and their drama. I was in a world where education, intelligence, and personal growth were as valuable as one’s life. It was my home, where I belonged. And the more I explored new concepts and ways of thinking, the more I was convinced that education was truly the key to one’s success.
Being in college did more for me than any other experience (except when I gave my life to the Lord). It opened up windows of opportunities for me that would not have been there had I never went. I was more convinced that being an educator was the right profession for me, because I needed to show others what education could do for them also. I knew that if I came out of this system with empowering tools for success, I could then demonstrate to others how they, too, could become more powerful than the average man. I was so consumed with learning that I spent so much time making sure that I got everything I possibly could within a four-year time frame. So, upon graduation in 2005, I left the UC Davis undergraduate program with a Bachelor’s Degree in English and another in African American Studies. But I didn’t stop there. I returned to the school, and enrolled in their School of Education program where I received my Teaching Credential and Master’s Degree in Education—both within 15 months. By the age of 23, I was not only loaded down with academic degrees, but I had also received a full-time job as an English instructor. But I’m getting ahead of myself.

Even though I am not part of this tour I posted anyway at 5:50am. It is tough being a teacher. This book is greatly needed