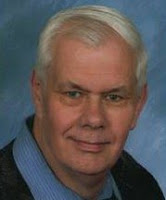 Edward (E. G.) Lewis was born and raised in Cincinnati, Ohio. A former newspaper editor and publisher, his articles have appeared in many national and regional magazines. He also wrote and directed corporate training films.

Mr. Lewis holds a graduate degree in Economics from Ohio State University and worked in Planning and Corporate Management before choosing to become a fulltime novelist. He writes both Biblical fiction and Commercial fiction.

A lifelong Christian with a burning interest in the life and times of the early Church, he feels we are privileged to follow in the footsteps of these earliest believers in the teachings of Christ. He and his wife, Gail, also a writer, live on the Southern Oregon Coast.

I would have seen the lion if those clods of dirt flying past my head had not distracted me.

There I was, relaxing on a hill, bothering no one. The sheep poked around the sparse pasture for the last clumps of edible forage while I sang Psalms and wove a basket. The summer sun had browned the grass and baked the Judean hills, turning them tan as barley bread.

My tongue swept around my mouth tasting the gritty dryness of the afternoon as another clod sailed overhead. It struck the ground in front of me and broke apart in a spray of dust.

All sorts of strange objects took flight whenever I tended the sheep. Overripe figs, half-eaten pomegranates, sticks, and now clods of dirt had sprouted wings and flew through the air.

The boys did it to upset me, to make me cry. Once upon a time it had worked, but no longer. If I cried, they won. And I would never let them win.

Jumping to my feet, I spun to face them.

Two more clods headed toward me.

Ducking under them, I rested my hands on my hips and glared across the ravine at the boys throwing them. “Stop, or you will be sorry,” I yelled and adjusted my headband.

Like the bigger shepherds, I carried my shebet, a small club, and my sling tucked in my sash. I tugged the sling out and stooped to gather stones. Imagining myself David, I threw my shoulders back and rolled the stones in my hand. Seeing their startled faces when one of these rocks bounced off their forehead would do my heart good.

But there would be no rocks to the head this day, I thought with a sigh. No matter how angry they made me, there was little I could do. On Mt. Sinai, the Lord gave Moshe the stone tablets containing the Law which commanded, Thou shalt not commit murder. The boys had nothing to fear and they knew it. Gavriel and Simeon could throw things, call me names, and torment me without fear of retaliation.

“Perhaps you should go to Jerusalem and apprentice yourself to a fuller.”

Beside him, Gavriel snickered at the idea of seeing his friend removing lanolin from wool cloth by plodding knee-deep in a vat of stale urine.

Gavriel’s snickers became laughs. They grew louder until he doubled over, holding his sides and choking.

“Go away! You do not belong here,” Simeon shouted. He stuck out his tongue and did a little dance, daring me to do something about it.

“Do too belong here. I am tending my flock.” The smooth stone slid between my thumb and fingers.


Where to hit him?


“Sheep are for shepherds.” He gestured toward his loins. “Shepherds. Understand little girl?” He spat on the ground, clearing his mouth of the despicable word girl.

A rock to where he pointed would give him good reason to dance. I gritted my teeth in frustration. Not only did Yahweh’s law rule my life, but Abba’s did as well. My father would never approve of me hitting a boy in the loins with a stone.

Abba’s stern voice echoed in the back of my mind. “Rivkah, my little dove, will you never learn? A gentle answer turns away wrath, but harsh words stir up anger. Do not fight with the boys. Exhibit the comely behavior and feminine demeanor befitting a daughter of Avraham.”


Easy enough for him to say.


“There is no such thing as a shepherdess,” Gavriel hollered.

I shook my fist at him. “Did an unclean spirit turn you into a goy?” He glared at me for calling him a gentile, not that I cared. “What about Laban’s daughters, Leah and Rachel? Have you never heard of Jethro’s seven daughters, of Zipporah the shepherdess and wife of Moshe?”

Behind me the sheep bleated nervously. I ignored them. The boys and their dirt balls not only upset me, they bothered my sheep as well. Sometimes they threw things into the midst of the flock scattering them. It took a lot of effort to chase after those sheep and bring them back together.

We stared daggers at each other across the narrow gully.

I fit a stone into the pouch of my sling and let it dangle at the end of its straps. Shepherds used their slings to drive off small beasts and vermin. Gavriel and Simeon qualified.

Swinging it up in a practiced arc, I whipped it around in a tight circle. The whirling blur above my head buzzed like a hoard of locusts.

My warning shot smacked the ground in front of their feet, boring into the dry soil and scattering dust over their bare toes.

Gavriel laughed. “Ha! You shoot like a girl, little shepherdess. You would miss the side of a camel if it were standing right in front of you.” He stuck his fingers in the corners of his mouth and made a face.

“May the Lord will your face to remain like that for the rest of your life.”

There were several more stones in my left hand. If they wanted war, war they would get. The boys jumped when they saw me reloading my sling.

But I never threw that second stone.

Shemu’el appeared behind them while they scoured the ground for ammunition. He is three years older than we are, almost twelve and soon to become a man. Shemu’el is tall, and stronger than Gavriel and Simeon put together. And, most importantly, he is my friend. It upsets him when the boys bother me.

They were so busy hunting for rocks, his footsteps went unnoticed.

Taking long strides, he marched up behind them and grabbed each of them by a shoulder.

I grinned when the boys winced and howled as he shook them.

“Go take care of your sheep, you little fools. They are beginning to stray.” He spun them around and gave them a shove.

Today’s battle may have ended, but our war had not. The boys shot me a look that promised revenge, then slunk away.

Shemu’el swung out his staff spanking them as they left. He turned, glanced up at the ridge behind me, and gave a start.

The expression on Shemu’el’s face made my stomach quiver.

He studied the hillside a moment longer, then, quick as a gazelle, leaped the ravine and ran to where I stood. “Look, Rivkah,” he whispered. “A lion.”

I'm glad we were able to get this one on here for you Ed!


Schedule to post with review. Hope to see the next book soon!

Scheduling to post with a review for tomorrow! Thanks!

scheduled with a review.

this was a great book, can't wait for the next one

Great book - mine is up with a review.