The Rose Conspiracy by Craig Parshall

Craig Parshall is Senior Vice President and General Counsel of the National Religious Broadcasters Association, and the author of six legal–suspense novels: the five books in the Chambers of Justice series, and the stand–alone Trial by Ordeal. He speaks nationally on legal and Christian worldview issues and is a magazine columnist. He has coauthored five books with his wife, Janet, including the historical novels Crown of Fire and Captives and Kings. 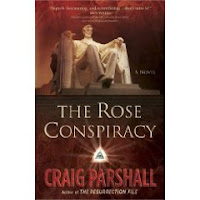 The driver behind the steering wheel was sweating like a hunter in the dripping heat of the jungle.

But this was a very different kind of jungle.

It was five minutes before midnight, and the car was cruising along the marble-and-monument-studded streets of the Capitol Hill district of Washington DC. The driver was tugging at a collar edge. Drops of perspiration trickled down back and torso, even with the air conditioning on. Maybe it was the freakish heat wave that had hit the city, causing brownouts and power failures across the city. Maybe it was something else…the nasty assignment that had to be taken care of. When the trigger was pulled, and it was all over, the long-missing pages of John Wilkes Booth’s personal diary would then be in the grip of someone else’s hand.

Yet the driver knew what was actually at stake that night. And it really wasn’t about the Booth diary. Or even the assassination of Abraham Lincoln at the hand of a Confederate radical. The note that was about to be seized contained a message with ramifications far beyond any of that.

Sweltering temperatures had suffocated Washington with a relentless haze of humidity that week. Even though it was only June, temperatures were in the low hundreds during the day and in the nineties at night.

The only thing cool to the touch was the white marble of the statues and monuments. The driver steered past the Lincoln Monument and then slowed the car slightly. As usual, interior lights illuminated the massive likeness of Abraham Lincoln in his great marble chair. Once past the monument, the car picked up speed, entered Constitution Avenue, and started heading toward the National Mall. The destination was the Castle, the nineteenth-century red-brick building full of turrets and spires where the administrative headquarters of the Smithsonian Institution were housed.

The driver parked the car a block away and walked quickly to the side entrance of the Castle—then, reaching the door, quickly tapped a code into the security panel. The lock clicked open.

Upstairs, the lights were still on in the office of Horace Langley, Secretary of the Smithsonian Institution. He was working late.

But the object of his work that night was not business as usual.

Only moments before, Langley had opened his safe and pulled out a metal case containing a folder enclosed within a plastic zip bag. Now he was studying the contents—eighteen pages from the diary of John Wilkes Booth. They had been missing for nearly one hundred and fifty years. Their disappearance had occurred suspiciously, about the same time as the federal investigation into the assassination of President Abraham Lincoln was taking place. Booth’s diary had been taken when the assassin was captured and killed. But at the time at least one witness swore that eighteen pages had been removed from it.

That was the point at which those pages seemed to have vanished forever.

Then, a century and a half later, the granddaughter and sole heir of a farmer in central Virginia went rummaging through her grandfather’s attic after his death and happened upon some boxes of old letters and papers. But one sheaf of papers looked different. While much of the writing on them was faded and undecipherable to the layman’s eye, a reference to Abraham Lincoln was visible. In his will, the farmer had given everything to his granddaughter—except the papers. Those, he said, must go to the Smithsonian Institution.

After some wrangling with lawyers, the eighteen pages were transferred to the Smithsonian. Horace Langley had succeeded in keeping the discovery from being leaked to the press, even though he was thoroughly convinced that the pages belonged to the Booth diary.

That June evening, as Langley studied the pages in his office, he knew that some eight hours hence, a council of epigraphers and historians were scheduled to convene and, for the first time, to study the Booth diary entries in that same office.

But he had to get the first look.

He had a pair of white gloves on as he studied the brittle pages, yellowed from age. A pad of paper lay on the desk in front of him, next to his pen. There was a glass of water off to the side.

Langley then began to slowly, painstakingly, write down something on the notepad.

Just a few lines of writing.

He paused to study carefully what he had written.

Then he heard something. He looked up, half-expecting a late-night visitor. “I wasn’t sure I would see you,” was all Horace Langley had a chance to say.

The individual who had entered through the side door below was now standing in front of Langley holding a handgun with a silencer—and proceeded to fire two clean shots directly into the left upper quadrant of Langley’s chest.

The Secretary started to grope upward with his arm, trying to touch the injured area of his chest, but failing. He fell backward into his chair, slumped, and then fell to the floor, where he collapsed on his back, surrounded by an expanding pool of blood.

The shooter stepped over to the desk, picked up the Booth diary pages, placed them back in the plastic zip bag, and put that into a larger bag. The killer snatched the pad of paper, ripped off the top page that had Langley’s writing on it and then another page for good measure, and put them also into the bag. Then the killer placed the pad of paper back on the desk with a clean page exposed as Langley lay dying on the floor, making a final gurgling, gasping sound. Before leaving the room, the shooter paused only for a moment at Langley’s desk, gazing down at the empty drinking glass that was resting there.

Then, exiting quickly through the same side door below where entrance had been made a few minutes before, Langley’s killer made a perfect getaway.

The security guards didn’t notice anything out of the ordinary until twenty-five minutes later, when one of them was making the rounds and stopped to check in on the Secretary. He caught sight of Horace Langley’s feet protruding past the edge of the desk. And the feet in Langley’s dress shoes were absolutely still.

As still as the marble and bronze statues of the famous men that were frozen in time, scattered as monuments across Washington, and that were illuminated by the halogen street lights that buzzed overhead in the suffocating heat of the night.

Scheduled without a review. This one sounds great--so I'll get a copy at the store.

Ready to go at 8 AM tomorrow morning.

Scheduled to post. No review yet but soon. I'm about half way. GREAT book!!!

If I can get the time, I'll return and add links to some reviews - feel free to stop by and leave a comment with a link to your review and I'll get it added.

I've read, reviewed, and posted on this FANTASTIC book.