The Random Acts of Cupid by Amanda Tru

***Special thanks to Amanda Tru for sending me a review copy.***

With a lifelong love of reading and writing, Amanda Tru loves to let her imagination paint pictures in a wide variety of genres. Her current book list includes everything from a Christian time travel / romance series, to an action-packed suspense, to a romance involving a woman who likes to anonymously play matchmaker.

Amanda is a former elementary school teacher who now spends her days being mommy to three little boys and her nights furiously writing. Amanda lives in a small town in Idaho where the number of cows outnumbers the number of people. 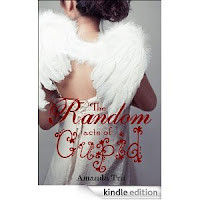 Elise Hutchins has a secret. She likes to anonymously play matchmaker for people she doesn't really know. But when lawyer Ryan Jenkins discovers she's Seattle's Cupid, he thinks her methods are deceptive and she shouldn't be interfering in the lives of others. Now Elise has 24 hours to present her case and prove her character to Ryan. Otherwise, he will reveal her secret and ruin her reputation along with possibly all of the good she's done. Will following her around on her Cupid errands change his mind about her? And, in the end, will Elise sacrifice her own chance at love to make one final match for her best friend?

“But when you give to the needy, do not let your left hand know what your right hand is doing, so that your giving may be in secret. And your Father who sees in secret will reward you.”

My limbs were weak with shock as I rushed through the hallway, dodging past other students like a fish struggling to swim upstream. I had about thirty seconds to fix my mistake and save my best friend from feeling the worst emotion known to a high school girl—embarrassment.
I could hear my other friend, Britney, struggling to follow my trail.
“Hurry, Elise!” she urged. “Chandra was going to talk to him right after class!”
Tears of frustration burned my eyes. I wanted to snap back at Britney, but I couldn’t waste the time. Why hadn’t Britney simply told Chandra the truth herself, instead of running to report to me? As much as I wanted to blame Britney, I knew this whole situation was my fault. It had been my idea. I had handled the details. Now my best friend was going to face the consequences.
I hadn’t intended on embarrassing her. It had just been a stupid prank. Chandra knew we always pulled practical jokes on each other as birthday ‘gifts.’ After all, she had been the one to bless me with a brightly wrapped present of lace panties in Art class on my birthday. Now THAT had been embarrassing!
So when I sent her flowers for her birthday and signed the card as Damon Fiest, the boy she currently had a major crush on, I had assumed that she would immediately recognize her birthday practical joke and see the humor in her friends’ stunt. After all, Chandra didn’t really travel in the same circles as Damon. Since he didn’t seem to know that she existed, she should know right away that the real sender could not be him.
No one outside our small circle of friends was supposed to know about the prank. The flowers were supposed to have been delivered in 7th period, at the end of the school day. But before I could find Chandra after school and see her reaction, Britney had rushed up to me, saying that Chandra was looking for Damon to thank him for the flowers!
Dread had sunk like a rock into the pit of my stomach, making me feel ill. Immediate, intense guilt struck me. I panicked. Chandra was crazy about Damon, and now she was going to be humiliated when she tried to thank him for flowers that he never sent! Damon would probably think she was mentally unstable and never want to have anything to do with her.
I felt terrible! What kind of friend was I? Only an awful person would send flowers and lie about who sent them! Why had I been so stupid?
I burst out of the school doors, my eyes frantically searching the grounds. Chandra would have tried to intercept Damon before he reached his car. Since the star football player always parked his old Mustang in the same spot, then Chandra had to be around here somewhere.
Please! I prayed. Please let me find her before it’s too late!
My eyes tripped over dark hair and a purple jacket halfway hidden by a tree at the corner of the school. I rushed closer, my heart pounding as if I’d just run a race at the Olympics. As I came around the tree, I stopped suddenly, stunned at the scene in front of me. Britney skid to a stop beside me.
I felt my mouth literally fall open in shock as, apparently oblivious to the world around them, Chandra and Damon kissed.

All rights reserved. No part of this book may be reproduced in any format either written or electronically without the express permission of the author or publisher. The only exception is brief quotations in printed reviews.

This novel is a work of fiction. Although places mentioned may be real, the names, characters, details, and events surrounding them are the product of the author's imagination and therefore used fictitiously. Any similarity to actual persons; living or dead, places or events is purely coincidental and beyond the intent of the author or publisher.

All scripture references in this book are used from the English Standard Version of the Bible.

Even though I was not part of this tour I posted anyway. Great idea for this plot.

Have a great weekend.

would love to join you!!

This article is mind blowing. When I read this article, I enjoyed.