Flashpoint: Book One of the Underground by Frank Creed

When the tour date arrives, copy and paste the HTML Provided in the box. Don't forget to add your honest review if you wish!

It is time to play a Wild Card! Every now and then, a book that I have chosen to read is going to pop up as a FIRST Wild Card Tour. Get dealt into the game! (Just click the button!) Wild Card Tours feature an author and his/her book's FIRST chapter!

Flashpoint: Book One of the Underground 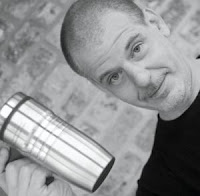 A rabid speculative fiction fan and aspiring author since boyhood, Frank Creed’s sojourn and the lack of Biblical speculative fiction in Christian bookstores has left a chip on his shoulder. Frank founded the Lost Genre Guild in September of ’06 as a community for fans and writers alike. After years of learning the craft and helping others polish their fiction, he now serves as a critic for The Finishers, a manuscript evaluation service for clients of both fiction and nonfiction.

Frank’s first sci-fi short story, “The Last Newspaper,” took first place at the U.W. Whitewater Literary Conference in 1983. His first novel, Flashpoint: Book One of the Underground won the ’06 Elfie for best sci-fi novel at Elfwood, was chosen for the CFRB ’07 IMPRESS award for best book toured, and has been nominated for several awards this year. Frank’s short stories have been published in secular and Christian spec-fic anthologies.

Frank’s online ministry began two decades ago with the Body of Christ and debating Satanists in an effort to save his sister. It has since grown to include writing Christian fiction. After sustaining life-threatening injuries in a 1999 head-on collision, Frank may have been left disabled, but his writing suddenly took on a new clarity. Novelist Mary Lu Tyndall says: "Frank Creed is one of my favorite people. He has a heart for God and is, in my opinion, one of a new generation of spiritual warriors."

Flashpoint [Function: noun] 1: the lowest temperature at which vapors above a volatile combustible substance ignite in air when exposed to flame 2: a point at which someone or something bursts suddenly into action or being 3: TINDERBOX: a potentially explosive place or situation
—merriamwebster.com

THIS IS IT, WE’RE HERE. Climb the slope on the right shoulder. Hide in the beams as best as you can. Whatever you do, stay under the bridge. If you come out, the cameras will spot you and all this will be pointless.”

The highway overpass loomed ahead. My father continued, “The car can’t be hidden under the bridge too long or they’ll figure out where you went. You’re gonna have to jump out while we’re moving.”

“Sometime, someplace, I know we’ll see each other again. Use your freedom well. Now!”

That single word launched me out the door. As it swung shut behind me, Dad screamed at Jen, “Go!” I stumbled into a run watching her bail-out. The Geo Aphid sped off.

Jen had sprawled on the street. I helped my kid-sister to her feet. She’d hurt herself, but the bleeding amounted to pink smears on the palms of her hands.

“Dave!” She whimpered my name, but followed.

We clambered over the rough, fist-sized stones that covered the slope. At the top, the slope met the girders that supported the road above us. I pulled off my t-shirt and cleared the I-beams of spider webs and bird droppings. We slumped on opposite girders, facing each other.

Jen’s wide eyes glinted shell-shocked madness. “We’ll save them! Whoever comes for us, if they’ll help us, we could get them out!”

“We don’t even know where they’ll be taken,” I grumbled.

“I’ll hack that off the Web!” She reached for anything to pull herself from calamity’s quicksand.

Tears welled-up in her eyes again. I didn’t want to start an argument, and I definitely didn’t want to shatter the kid’s hopes. “I want our family back too, Sis, but Rehabs are usually guarded.”

We’d do well just to avoid the peacekeepers who had to be looking for us. Who could Dad trust to help us? How would they get us out from under the bridge without anyone seeing? Where could they hide us from searching peacekeeping units? How would we even get food? The hum of a motor grew near and we both shrank back against cold steel. A car passed beneath.

I tried to turn the conversation to something else. “I hope Mom and Jeff are okay.”

Jen buried her face in her hands, her shoulders rocking with sobs.

When her tears ran out, Jen scowled and whispered, “If we’re His children, why’s He doing this to us?”

I left her in silence. Like I could answer that. How could He even allow a world where belief in the Bible made one a terrorist? Ripping apart our family would teach, what? What kind of lesson was this? I finally thought about how parents treat children. “I think it’s like when we’re kids. Mom or Dad punished us, and made us try things we didn’t want to. Having fun or being happy all the time isn’t the most important thing. I guess God’s like that, too. Dad said we’re being taught something, remember?”

“Yeah. How to miss your mom, and worry if you’ll ever see her again,” she pouted.

Little sisters out there, I speak for big brothers everywhere when I ask, please don’t stick us with hard questions that you’ve already answered. Very annoying.

I dug my pack of Winterfresh Extra out of my jeans’ pocket and let the conversation die. We moped into a sullen silence, our hopes shredded by our thoughts.

Spattering raindrops came and went. So did tears. Minutes piled into hours. Tracking time became impossible. That made me think of my e-wallet with the broken watch function. I powered it up and clicked past the com-vision white and yellow homepages. I selected the picture frame feature. Jen and I passed it back and forth, watching our party vids. Jen’s driver’s license and Jeff’s twenty-first birthday last month. My high-school graduation party two years ago. Jeff and I moving into our first apartment . . . Bad idea. I pocketed the e-wallet. Our thoughts spiraled into deep gloom, leaving Jen to weep her way out, and again we sat in silence.

My gum had lost its Extra-long-time flavor for what must have been hours before I realized the building I’d been staring at was a church. The bridge cut off its steepled roof. The One State allowed only one kind of church. Dad told me about people who called themselves Christians, but believed the Bible to be myth, and equal to the Koran, Upanishads and Bhagavad-Gita. With no truth to argue over, 500 years of church splits healed overnight. They called themselves the One Church. No points for creativity, but I guess it represented their unity.

Dad said when he’d once asked a One Churcher how he knew that love was any better than hate. The man had said the answer’s in our heart. Dad then asked what was wrong with the hearts of criminals. There, next to the bridge, out in the open, people were being taught to find love in a broken heart. Here, forced to hide under the bridge, were children of the Heart Surgeon.

If I leaned down I could see a sliver of eastern sky. I began watching for dawn’s brush to paint the clouds. Pigeons roosting under the bridge started their morning cooing. Cool dampness raised goose bumps on the backs of my arms. Finally, my shivering grew worse than my t-shirt’s filth. I shook it out and put it back on.

Then the end came.

Thanks to those who run FIRST, and all requesting a review copy of Flashpoint. I still can't believe I'm really a published novelist, and now Flashpoint's been nominated for it's third award by a third stranger.
Jumpin on the bed!

I do hope it entertains.

I'm scheduled to post on the right day - I loved, loved, loved this book - can not wait for book 2 to come out later this year!

I'm set to post also. My husband snagged my copy before I was able to read it...but I sure plan to! If he finishes in time, I'll post his thoughts. :-)

Scheduled for midnight post at Incurable Disease of Writing.

Posted on the 19th